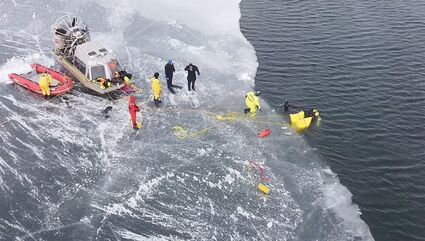 Search & Rescue teams from three counties converged at the lake to assist the multiple local agencies that were involved with the recovery efforts.

Two local men perished during a search and rescue effort at Keyhole State Park that began on Thursday and continued until dusk on Sunday.

Bruce Lang, 68, and Jason Otto, 48, both tragically lost their lives while attempting to rescue a stranded recreationist who had fallen through the ice.

The Crook County Sheriff's Office received a call on December 15 at around 9:10 p.m. that a male subject had gone through the ice while driving his UTV on the reservoir.

Dispatch spoke to the subject on the phone, who said he had made it out of the water and was now lying on the ice.