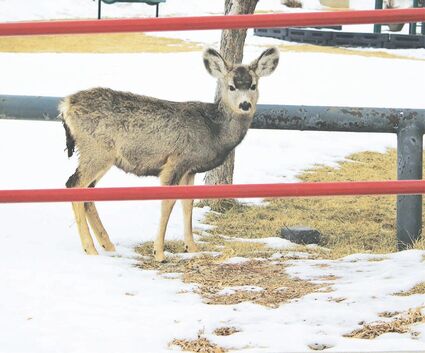 This deer, located in Waters Park, was found to be exhibiting symptoms of illness.

Pine Haven's deer population is showing signs of illness this winter with the discovery of a yearling that had lain down and could no longer rise due to as as-yet unconfirmed malady. This forced Game Warden Mitchell Kern to put the animal out of its misery.

A young buck in the same circumstances was later found by Public Works Director Sunny Schell.

In a recent report given to council, Schell said, "[Kern] said to keep an eye out for dead deer around town for the next couple of months."

With that said, the Wyoming Game and Fish Department focused on all six hunting areas in Crook County thi...