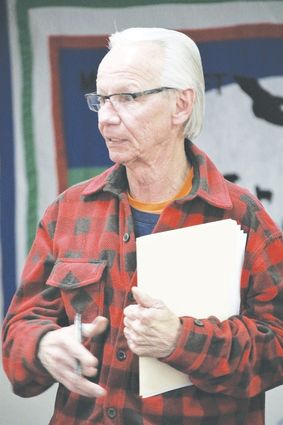 Newly seated Moorcroft Mayor Dick Claar and the council opened two quotes for garbage pick-up at a special meeting last Wednesday. Claar advised, "We are not awarding at this time, what we're doing is seeing if it's feasible for Moorcroft to take on this option."

The council is contemplating returning to the privatization of garbage pick-up in town because of the annual maintenance and fuel costs of running the town's current truck, which, according to Public Works Director Cory Allison, comes in at around $13,700. Moorcroft's two garbage trucks are at the tail end of their lives and Allison advised that the town will have to buy a new one "in the next three years" at a cost of $250,000-$350,000.

Allison explained that the $60 per ton tipping fee for an estimated ten tons a week at the landfill, providing the town with approximately $2400 a month, along with the amount spent by the town on pick-ups, means the privatization of pick-up including commercial and residential could potentially save the town money. This, though, according to the discussion of council members and Allison, is diminished by a few commercial accounts in Moorcroft that "have been given some pretty good deals"; Councilman Owen Mathews cited the school as an example.

To rectify this inequity, Mathews suggested that if the town does continue to pursue privatization of garbage pick-up, the commercial rate should be established by the contractor. The businesses and contractor will work price out without the town's interference.

"For us to try to step in and muddle it and make a lot of different exceptions it's going to get messy; we're running into that problem now. The only way this is going forward in my mind is if everything going out there is being charged the same thing," he said.

Mathews, who had, in previous discussions, been skeptical about any savings from privatizing Moorcroft's garbage concerns, shared the reason for his change of mind.

"When we talked to DEQ and [discovered that] we can have multiple expansions [of the landfill cells], it will buy us enough time and make it work to bring garbage in from outside. It suggests a feasibility for moving forward that is cost effective to the town," he said.

He did, however, express his continued caution on the subject, saying, "Before we move forward [with the pick-up] we need to make sure we have a plan for the landfill actually going forward. Up front it looks feasible; we just need to see how all the pieces fit together. We need to make sure we're not looking at just the one piece."

Mathews reiterated the reason the town is interested in possible privatization of the landfill and pick-up in the first place: "Because it's cheaper for us to have them do it."

Naughton assured the council that they will bring tonnage from the rest of Crook County and beyond. TDS, the company that is putting together a proposed contract for the management and operation of the Moorcroft landfill, must assimilate significantly more garbage than is currently generated by only Crook County to offer privatization as a viable option to both parties.

While the pick-up contractors can probably start within a month of an agreement, TDS, if signed, will not be in place for an anticipated three months, putting more work on the public works crew, noted Allison.

In fact, this possible twofold change of practice will significantly impact the public works department. Mathews brought out that if the town pays a contractor to pick up the garbage and to TDS operate the landfill, "It will change the structure of your whole department."

Though Allison does not want to relinquish man hours, saying that his men can be moved to other jobs like the MTC, Mathews told him that any savings caused by the proposed change cannot simply be absorbed into the maintenance department to be used for labor without justification if the rates are raised later to cover landfill closing costs.

Councilman Paul Smoot strongly agreed with this sentiment, arguing that if Allison does not cut back the hours that his men do not need to pick up garbage and work the landfill, "I don't see the savings. If we're going to maintain our same labor hours, then there is no savings to the town. I don't want anyone to lose hours, but at the same time, if we don't have that need..."

Mathews suggested a revised budget outlook from Allison to show the council from where the money will come to pay for the proposed changes to the department's labor hours, "So when we make this decision, we understand all the areas affected".

Claar said that HDR Engineering's Heath Turbiville had previously advised him impending permitting of the next extension for the landfill and reiterated his desire to reopen the landfill to the other municipalities and county.

The council anticipates possibly making a decision at the regular meeting on January 14.