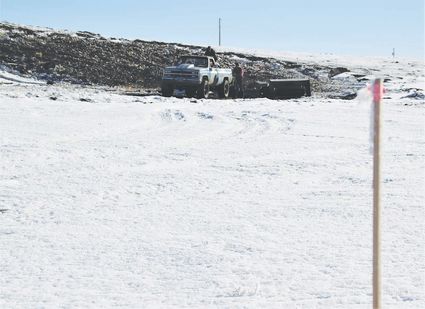 This current vertical expansion over the former pit has been well compacted and is approved to the stake in the foreground; the next approved expansion will be nearby.

The longstanding issue of garbage was again discussed at the Monday night meeting of the Moorcroft Town council with, still, no apparent resolution. Though the vertical expansion at the landfill has been approved and the site will open once again to outside customers, the council was divided on the issue of privatizing garbage pick-up.

Mayor Dick Claar shared with his fellows a cost/revenue sheet that shows, in his opinion, the viability of privatizing the garbage pick-up for Moorcroft, saying, "I put down every figure I could think of to show you what I thought and it shows a plus for the town."

The discussion became heated as Councilmen Paul Smoot and Owen Mathews again expressed their concern over losing any potential savings due to Public Works Director Cory Allison using the saved funds to pay wages for work somewhere else. Smoot reiterated that the department had overspent previously on manpower and Mathews condemned the idea of the landfill subsidizing man hours somewhere else.

Petersen agreed, saying that the man hours are the lesser part of the issue.

"We have to be able to look at the numbers. By us not picking up trash, we're going to save some wear and tear, fuel etc., [but] how much are we actually saving?" he said.

The mayor asked the council for exactly the information they required to further the discussion and decision regarding the privatization of garbage pick-up, saying, "You've got the quote from Western Waste [Collection]. It's good for three years if the tipping fee at the landfill remains at $60 per ton."

He readdressed the need to raise commercial rates, commenting, "We're too low."

Allison told the governing body that he was "lost" and did not understand what they wanted. Mathews asked him for an updated budget, showing the removal of garbage truck fuel costs and operational savings as well as from where he plans to pay the extra man hours without subsidizing from the landfill savings.

"We pay Cory some odd thousand dollars a year to manage his budget,” he said.

Speaking of the landfill itself, HDR Engineering’s Heath Turbiville smiled as he reported that the DEQ has approved another vertical expansion. The situation will be revisited by that department in three years, “If you fill it up before 2023, we’ll have to reapply, open another cell or haul someplace. If we run to that time period and it’s not full, we’ll have to apply for an extension,” he said.

“So you should be good in that aspect for a little while.”

Mathews told his fellows that DEQ is willing to provide the town with at least three future expansions “if we’re moving forward as a regional”.

Claar wants to see the “council go to the county commissioners and ask for a solid waste district”.

He said that a mill levy would then be on the ballot within a couple of years.

Councilman Dale Petersen opined, “I know we need to do something; my preference is that we don’t wait to do something. We have a little momentum going with the county commission right now, I think we continue to push that direction.”

The problem is, according to Mathews, “We, as a town, would have to [pay] a lot of stuff forward and have the expectation of being reimbursed from the waste district if that passes. If you wait until you pass the waste district, and then start going through all that, you’re not going to get that done in three years. You’re going

to have to have the permitting and approval first.”

The council approved opening the landfill three days a week and allowing garbage from outside Moorcroft to return to the landfill, but without a date to open the gate because of the question of garbage pick-up. Said Petersen, “We don’t want to put an effective date until we get this figured out.”

After further discussion, again the matter of garbage pick-up was tabled until the February 4 meeting.