Pine Haven’s EMS has been working on funding a hydraulic gurney to be attached to the ambulance for the last couple of years and Saturday’s fundraiser raised more than $6000 toward that goal. 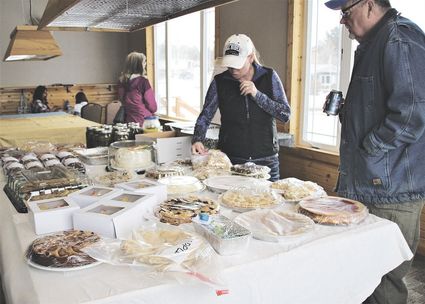 EMT Barb Hardy reported that there were probably more than 200 guests who “came and stayed for a while and left” throughout the three hour event. There were five participating teams in the gurney race; each team paid a $30 entrance fee. The teams then had to run a course pushing the manual gurney to pick up a “patient” (consisting of two bags of pellets) and push the loaded gurney back to start. The Downey-Waters team, who won the kitty, donated their winnings back to the EMS.

Keyhole Country Club contributed the venue and snacks, the community provided the baked goods and other items to be auctioned and Royal Neighbors of America matched the first $1000.

She said that people had so much fun at this first event that the EMS is planning on making the fundraiser an annual occurrence. “It was a community effort and it was awesome!”