It wouldn’t be possible without support from the community, says Tanja Miller of Alpenthal’s Dairy Goats, who organized the Black Hills Dairy Goat Association’s Dairy Goat Show at the fairgrounds over the weekend. This was the second year Crook County hosted its own goat show and, says Miller, numbers were up considerably.

“We were bigger this year than last year,” she says. “We had 240 goats and we have two rings, so we actually show 480 animals in less than 12 hours – on top of four showmanship classes.”

As well as 40 exhibitors from Wyoming, South Dakota, Montana, Colorado, Nebraska and Iowa, there were 30 youth showmanship exhibitors. Because the kids are asked to help out with showing animals for numerous exhibitors, and because the goats are shown according to their age, rather than according to the age of the person showing them, Miller says the groups are a mix of young and more experienced people and a lot of learning goes on.

“It’s really good if kids want to get into showing,” she nods. “If you have that many opportunities, you’re going to learn.”

There were more people, more goats, more classes than last year and double the number of local kids, she says. “It was just a good show because everybody was on top of it and everybody helped out,” Miller smiles.

The breeds shown during the show included Alpine, LaMancha, Nigerian Dwarf, Nubian, Oberhasli, Recorded Grade, Toggenburg and All Other Purebreed.

Miller tries to make the event stand out from the crowd by doing a couple of things slightly differently. As well as being part of the award system for youth showmanship, through which kids can earn points to potentially win the big prize, buckles are given as prizes for the showmanship classes (or goat-themed picture books for the pee wee class).

“We’re sticking out, we’re doing a little bit of something different,” she says.

Next year, Miller hopes to introduce agility classes alongside the costume class.

“I couldn’t do this without the community helping,” Miller is keen to stress.

On Tuesday morning, for instance, FFA kids and Lance Hoffland’s PE class streamed through the fairgrounds to take down the pens. Brian Kennah, FFA advisor, had already helped shovel out the buck pens after the show.

Staff at the fairgrounds helped out with setting up, running machinery and organization, while Sara Fleenor, 4-H Educator, provided the sound system and helped with advertising. The Crook County Fair Board offered support by providing the venue.

“We got a lot of local sponsors,” she continues. “It was really nice to have so many businesses involved and so many people offering to help.”

Some donations came from visitors to town who were enjoying the local surrounds wanted to support the event, she adds. Deckers meanwhile donated a barbecue dinner of burgers, brats and salads for 50 people on the Friday evening while Cordula and Gary Schmidt brought watermelon. 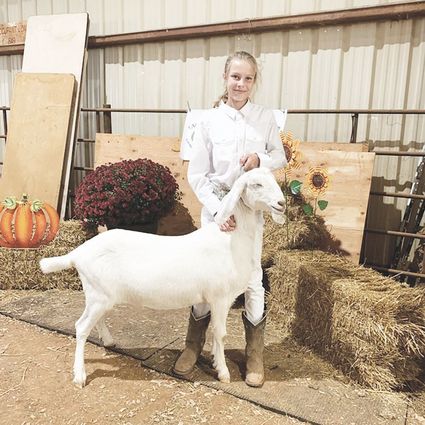 “I had all kinds of local people come in and help out, on top of exhibitors who helped with certain things,” Miller says.

The American Dairy Goat Association judges were Emily Thompson from Rochester, Minnesota, and Justin Bassett from Fort Worth, Texas.

If anyone would like to sponsor or help out with next year’s event, or if you have questions about showing yourself, contact Miller at 290-2324.