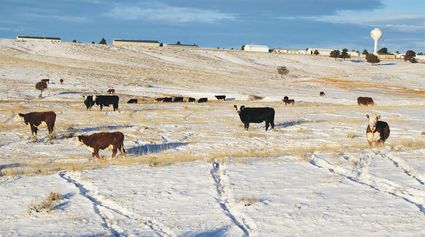 The first major snowstorm of the winter was kind enough to wait until after Thanksgiving Day to interrupt travel, though the cold wind and fog in some areas on Thursday certainly spoke of what was to come. When the snowflakes finally began to fall late on Friday afternoon, they would continue to do so throughout the next day, accompanied by strong winds and occasional whiteout conditions.

The storm system moved out of the central Rockies into the northern and central plains, according to the National Weather Service. Snow fell across a wide area stretching from Gillette and Wright in the west to Winner, SD in the east, and from Buffalo in the north down to Pine Ridge in the south.

Lead bore the brunt of the most recorded snowfall at 30 inches, with drifts of three to five feet. In Rapid City, new records were set at the National Weather Service office for daily and monthly snowfall.

Crook County fared somewhat better, with the area south of Beulah reporting the highest numbers at 13.5 inches, closely followed by 13 inches northeast of Hulett and 12.7 inches a mile outside Sundance.

Totals were a little lower elsewhere in the county, with Sundance and the area four miles south of Devils Tower reporting nine inches.

In Moorcroft, all of the streets were cleared on Sunday morning, after the storm passed, by town maintenance. According to Public Works Director Cory Allison, "I thought we needed it." Many small skid steers and pickups with blades on the front could be seen working as well.

Sunny Schell, Director of Public Works in Pine Haven reported that, while she was out of town over the weekend, associate Randi Flowers cleared main thoroughfares for emergency vehicles and residents who employed blades on their private vehicles.

"Everybody in town really pitched in and were out in their four wheelers and side-by-sides plowing and having a grand old time," she says.

According to law enforcement, there were no reported accidents in the area related to the storm. No roads were closed, though WYDOT warned against unnecessary travel due to reduced visibility and black ice.