More than 15 Moorcroft Volunteer Firefighters, many under 30 years old, and several EMS technicians gathered for a controlled training involving a structure fire early on Saturday morning. The small building of eight-inch concrete walls and a steel roof was specifically designed and built for this purpose by Wyoming State fire marshal Mike Reed and firemen Ben Glenn, Jeff Holberg and Dan Swaney.

The heat of the fire inside the structure reached 500 degrees as training commenced, allowing trainees to experience the “feeling” of a real situation, though Devish notes that the temperatures in the real thing would “probably be higher” and just like an oven, the heat reaches a point where it turns downward in the structure, so “You could cook a roast in there if you wanted to.” The volunteers were given this example of “fire behavior” as the flames climbed the walls and “rolled” over the ceiling.

The building was finished only days before this first training exercise, according to long time volunteer Fred Devish.

“Now that we have the building, we hope to be in there at least once a month if not more,” he says. He feels the structure will be a good training devise for search and rescue as well, because the searchers are blinded by “sweet” smoke (non toxic).

“They can’t see and it is pretty real,” he says. 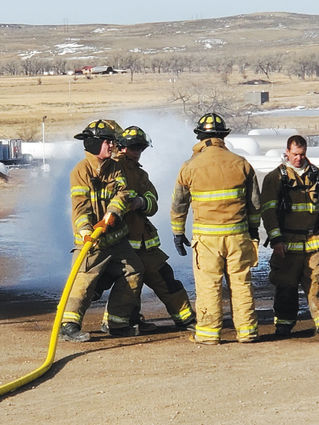 The town provided the funds for the training structure as well as several new air tanks to replace the expired equipment that could have endangered the lives of the fire fighters. However, the responders are in need of about 30 more tanks and, at almost $1000 apiece, the town was able to buy what the department absolutely needed to keep going.

If any individual or business is interested in contributing funds for this vital means of protection for the volunteers, contact Moorcroft Town Hall for more information.

The exercise was finished around 9:30 a.m.

“It’s fast and furious and then everyone can keep going [with their day]” says Devish. “It’s a fairly simple thing, but to get the real feel of the heat and the smoke is pretty [important].”