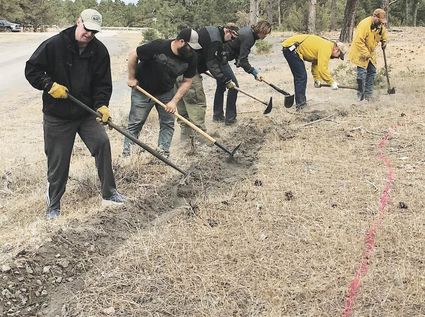 Volunteer fire fighters from across Crook County – as well as a few homeowners – trained to recognize and fight rural fires in a five-hour class Saturday morning.

The training included situational awareness; how to recognize elements of ingress and egress to ensure survivability for one lane roads, properties and structures; “drafting” water from a portable canvas tank, filling several different types of fire mitigation vehicles; how to utilize a particular type of nozzle to add foam to water to help smother flame; and how to dig “hand lines” to turn fire.

Twenty five volunteers attended the class and worked on three different stations throughout the morning with around 11 different types of fire trucks. According to Crook County Fire Warden Doug Leis, “There were some people from Sand Creek who are concerned about protection up in that area because they’re a long way from a fire station. They have a pickup with their own little pump and sprayer in it and they just want to see what they need to do to protect themselves.”

The only actual adjustment took place when the class was to participate in “foaming” an actual structure, but discovered electricity to the building was still live so changed their target to trees in the surrounding area.

This was the first training exercise of this kind in recent years, according to Lancaster. He said of the class that it is a precursor to another that is geared to urban/wild land interface training. 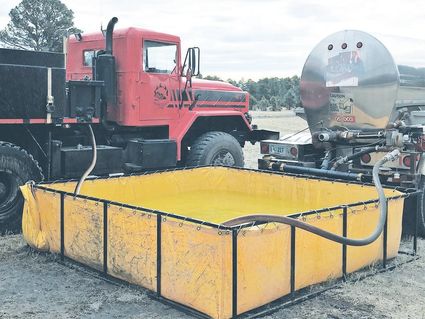 Leis had approached Jeremy Dedic and Jonathon Sloan of the Wyoming Forestry Department in Newcastle to assist in this exercise. Dedic, Sloan, Leis and Dallas Rolf of Sundance were the teachers for this class.

Leis later reported, “Overall, it was a good training.”

Pine Haven Volunteer Fire Chief Don Lancaster spoke highly of the event: “I thought it was a really good exercise and everybody had a good attitude. We had excellent training as far as I’m concerned.”

Leis hopes to make this type of training an annual thing, but will seek opinions from the fire fighter who attended and take their council on the matter. “We’re all volunteers; you have to kind of leave it in their hands,” he says.