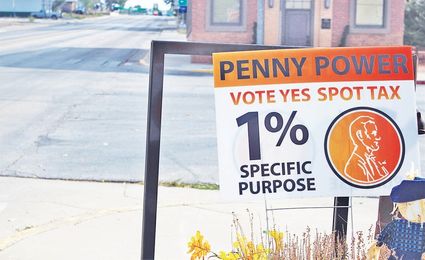 Moorcroft and Pine Haven have joined their sister towns in Crook County in an effort to make residents aware of the projects for which Specific Purpose Optional Tax (SPOT) has paid.

This sixth cent fell off of the sales tax last year, the total amount that was approved by voters having been fulfilled. Unlike many taxes, entities request a specific amount on the ballot and SPOT only runs until that amount has been collected.

The tax is returned to the counties and towns to be split evenly, each town and the county itself considered an individual entity. This return is dispersed without regard to population, so the smaller community of Pine Haven receives as much as Sundance and Crook County itself.

With the final checks having been received almost a year ago and subsequently spent, towns are beginning to express their concern about the tax being approved again. Individuals of the governing body for the municipalities cannot advocate for the reinstatement of said tax by law but, as residents of the area, a couple spoke candidly about moneys spent and prospects.

Moorcroft has, as of September, used the remaining funds for playground equipment, bathrooms in Noonan Park and myriad upgrades to parts of infrastructure including, among other items, the water line recently installed along the north cemetery line and the corrected line between a couple of properties along Green River Avenue last fall, says Mayor Dick Claar.

As a resident, he hopes to see the tax renewed to help with existing debt and possible landfill improvements, “In case a solid waste district doesn’t go through.”

Pine Haven Councilwoman Karla Brandenburg stated that the tax revenue has allowed the town to improve streets and drainage as well as install a new well. However, “We don’t have anything in our budget right now for improving roads, drainage [etc] and we won’t have money to do that if the tax doesn’t pass.”

With the funds from the previous sixth cent taxation expended, the towns’ leaders have put on hold any further upgrades to infrastructure and recreational facilities until after November. The question of the SPOT tax will appear on the ballot to be decided by the people in November.