Charlotte Joanne Goerndt, age 90, passed into the loving arms of Jesus on Sunday, July 18, 2021 in her home.

Gramma Jo was born with the name Charlotte Joanne Haviland…however, she did not use her first name as she often said, “Charlotte refers to a lady, which I am not, but Joanne is just plain ordinary…like me.”

She was born in her Gramma’s house in Mount Ayr, Iowa, on June 9, 1931, to Don and Neva Haviland. She had many homes in many places, first because of her dad’s Air Force career then his jobs in paving construction work. At the young age of 11, Joanne met a tall, dark-haired young man of 14 years, named Donald Lee Goerndt. Her young heart was swept away.

Wanting to please their parents, they waited until three days after her 18th birthday to marry on June 12, 1949, in Mount Ayr, Iowa. The adventures soon began for this lady who soon came to realize, “she weren’t no pansy!”

Joanne had a few jobs along the way: cashier at Whackers Dime Store in Monahans, Texas, at age 17; telephone operator at Northwestern Bell at age 18 right after she was married; plus librarian at the school prior to her graduation.

Oddly, she and Don’s lives followed the same pattern of employment that her mom and dad had. She proudly stated many times that she had driver’s licenses in eight states.

A stint in the Air Force took them to Sacramento, California, where their first child, a son, Joel DeHaviland, was born in 1954. Even naming their children would be a bit of fun as all the kids would be “JD”s, with the J for Joanne and the D for Don.

Road construction jobs were very demanding, but had to be taken advantage of when weather permitted and where they were available. Joanne had to always be at the ready as Don’s job could call him to different towns at a moment’s notice.

Within ten minutes, she could have their 41-foot trailer packed (cupboards taped and things battened down) and ready to be hooked up to the pickup…off to the next adventure! There were times travelling uphill when she had to jump out of the pickup and block the wheels to prevent the trailer from rolling back down a hill, often done wearing a pencil skirt!

What a strong young woman she was becoming.

Texas was a good choice for one of their homes due to the weather and jobs. This was also a good place in 1958 to “find” another child, Julie Dawn.

She had a funny story she told everyone about how she and Don were driving down a little chelichi (red clay) road. She alluded that a cute little thing was seen sitting on a stump (fence post) and she begged her husband to take “the cute little thing home”.

Joanne would smile and say in her best southern accent that Julie was “pooped out on a stump in Texas.” Yep, that was my mom’s sense of humor…gee, thanks, Mom!

On down the road of adventures, Don and Joanne decided that some roots were what they wanted in about 1962, so they moved to Moorcroft, Wyoming, where Don took a job with True Oil. There they built a house on a hill pouring all the concrete and constructing it themselves with little help.

They enjoyed having a home that wasn’t mobile or on wheels, at last! Jo worked as a school librarian for three years and played a part in many young girls lives as Girl Scout leader.

Their son, Joel, decided to join the military and left Wyoming. Soon in 1971, their second daughter, Jeni Desiree, came along.

They thought their life of moving was over but in 1973, as a result of a new oil field in western North Dakota, the family picked up their lives, reluctantly sold their home, loaded up their animals and belongings, and moved north with the gas plant to Watford City.

Watford City was good to the couple as they lived and prospered in their adventures. Julie went on to college in Minot and eventually Jeni graduated and also moved to Minot. The Goerndt’s were very active in the church and community there until Don passed away in 1995.

Loneliness made Joanne spend more time in Minot with her daughters and a short time later, a miracle occurred. Joanne found a new love through a newspaper ad.

The excitement spread through the whole family as Leo Mahoney and Joanne (at the age of 65) found love. It started a glow that remained and intertwined both families.

They were married in 1998 with the blessing of all their family members. Few are blessed with a loving mate twice in a lifetime but she truly was. They lived a full life, enjoyed traveling and each other’s company until 2011 with Leo’s passing in October.

Joanne’s love of all different genres of music was also etched in the hearts of her daughters through her. Jeni loved competing and performing so Joanne, along with Don or Leo, took to the road to cheer on and encourage her plus make sure that Jeni did not run out of gas along the way.

Jo was also a constant supportive audience member at many gigs as Julie made music with the bands, Rangler and Firehouse. Along life’s way, Julie married Timothy Petz and Jeni found her significant person in Mike Popham. What joy Joanne celebrated in each moment!

Joanne was blessed with grandchildren and great grandchildren who were her joy and her light. They constantly and continually brought pride and smiles to Joanne’s life.

As a demonstration of what faith is, one of her favorite sayings to teach them was, “If I tell you a mouse can pull a house, you hitch ‘im up!!!” To her, faith was everything.

Julie’s children, Levi Buechler, with wife Whittney, were blessed with a son, Aiden, and a daughter, Aunah, while Amber, who is married to Tyler Emerson have been blessed with two daughters, Charlotte and Etta. In all of Jo’s “doctoring”, she always appreciated the advocacy of her granddaughter, Amber, and her nursing expertise and advice.

Jeni’s son, Dylan Parsons, with girlfriend, Keely, were blessed with a son, Kieran, while Jeni’s other son, Jackson Goerndt, still attends high school. Joanne’s son, Joel, passed away in Tennessee in October of 2019.

Joanne’s pride in the accomplishments of all her kids, grandkids and great grandkids has always been broadcast as she spoke with all she knew. Her love of animals shone through with her collection of cats both real and collectible, as well as her best canine friend Sunni.

In February of 2020, Gramma Jo (as she has become known in her later years) got the surprise of her life. Mike and Jeni purchased a restaurant in Sawyer, North Dakota, and named it in honor of her….so the adventure of Gramma Jo’s Eatery began and continues to thrive. Her excitement and contribution to promoting its success has always been close to her heart.

OK, back to the countless wonderful people that have become the of this unforgettable, funny, witty, sweet lady who had a way of grabbing your heart and soul and turning it inside out. She made friends with many of you just by asking how you are and you found yourself sharing your life story with he.

She might have just said hello and smiled that beautiful smile, took you by the hand, and said, “Now, what was your name?” and you felt special to someone that day and the next time she saw you, your name was on her lips. She might have sensed that life wasn’t treating you especially kind that day and she would take your hand, bow her head, and say a short prayer to help you cope. 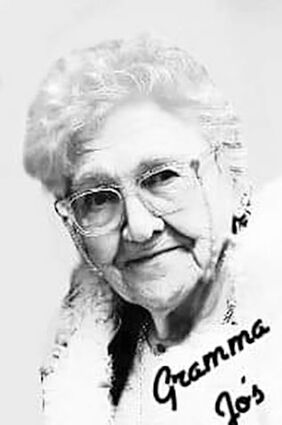 Little did many of you know, that your name was put on her two-hour prayer list to make sure that God did not forget you or that a ribbon was tied for you in her prayer tree in her yard so that God would take special notice. She was always faithful to her promise to pray and help make others happy.

In her 90 years, she spread love to all she could, prayed for all she could, and would smile inside and out when others greeted her and excitedly called out…“GRAMMA JO!”

In her honor, family requests that guests wear her favorite color blue. Visitation: Wednesday, July 21, 2021 from 5 until 7 pm at Thompson-Larson Funeral Home, Minot.

Funeral service: Thursday, July 22, 2021 at 10:30 am in Thompson-Larson Funeral Home Chapel, Minot. The funeral service will be livestreamed and may be viewed on the provided link at http://www.thompsonlarson.com. Graveside service following the funeral service at Hope Lutheran Cemetery, rural Sawyer, ND.