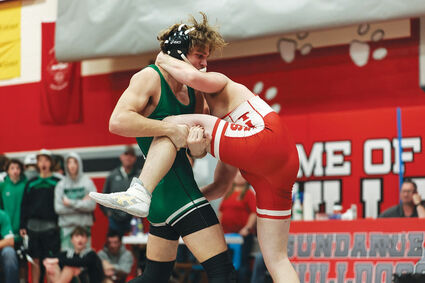 Dima Haskell goes for the take down.

The Wolves wrestling team competed in the 2A East Regional tournament this past Friday, in Sundance. They had a very successful day with three individual champions, six runners up, many placers and placed first as a team. The Wolves placed 20 wrestlers who will wrestle in the state tournament in Casper this Friday and Saturday. Individual results were as follows.

106: Dayne Humes pinned his way into the finals, where he won by major decision, 13-3, to take the championship.

Rebekah Anderson won her first match with a pin in 0:45 to move her into the semifinals, where she lost by decision an...